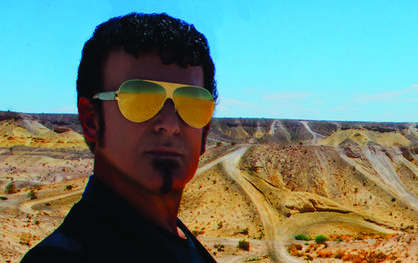 secret offers and specials for our VIPs!

Here's a special; treat for you today!

Dynamically fusing stylistic ideas from his classical background and a distinctive flair for melody and improvisation with today’s freshest cutting edge dance vibes, David Longoria builds upon the momentum of his Latin-driven 2013 album Baila! with his groundbreaking new album The Journey.

Bookending the collection with two unique versions of “Angels,” a 2016 Hollywood Music in Media Awards winner for Best EDM Song, the versatile trumpeter and composer goes on a full throttle exploration of his hybrid sound. David jokes about the invention of TDM (Trumpet Dance Music) as a new sub genre. Two years in the making, it’s a unique, one of a kind album that showcases Longoria’s horn playing amidst a high energy, rhythmic EDM soundscape.

“Like many of the jazz musicians I grew up admiring, including Miles Davis, I’m always looking to create musical ideas and sounds that haven’t been done before and that are relevant to what’s happening today,” David says. “EDM is everywhere these days, but the people listening and dancing to it may not know how well it works with jazz and instrumental pop. I wanted to introduce to them just what a live trumpet can do with catchy, accessible melodies. I knew people would be interested in the sound, but I wanted to make it the foundation of a concept that tied every tune together. There’s one thing we all have in common – we’re all on a journey. Our lives are full of milestones and intersections at all kinds of points, and I wanted to create a musical representation of those. The Journey is your life.”

The album starts and ends with “Angels.” There is a dance version that launches the album combining a baroque style trumpet along with EDM. It has a triumphant holiday-like fanfare with a modern driving beat. To David, this version represents the time before we were born. The album finishes with the same melodies but in a reprise form and without a beat. “It’s a little ethereal as it represents the afterlife,” he says. The spiritual theme continues on ‘Genesis,’ which is a musical version of your beginning. One note combines with another to start dividing as cells do in our creation. After a bit of building, a heartbeat appears and musically you can tell the themes are very unique, illustrating your blueprint of originality.” The compelling album cover, shot by Michael Jackson’s former photographer Harrison Funk in the desert outside Las Vegas, represents both Longoria’s ambitious quest and that of every person to find his or her purpose amidst a choice of pathways.

The emotional and spiritual centerpiece of The Journey is the powerful vocal anthem “We Are One,” a call for unity in a time of great division that was inspired by David’s realization that it had been 30 years since Michael Jackson and Lionel Richie wrote “We Are The World” to create global awareness of famine in Africa. Written by David and produced by him and the album’s co-producer Robert Eibach, the song was recorded in 22 cities across the United States. David planned to produce it with 20 artists and complete the recording in two weeks.

Once the word got out, it grew to include more than 600 artists and 1100 individual tracks, recorded over a year and a half. “We Are One” is now the “biggest song in the history of pop music” based on the number of artists contributing. David drew on his multi-decade resume of work with artists from different eras to amass artists from the ‘50s to the present, including The Dazz Band, Freda Payne, The 5th Dimension, Peaches & Herbs,  The Coasters, The Drifters, The Platters, Funkalicious and many others from the worlds of pop, R&B, country and jazz.

“The song addresses one of the biggest problems our country is facing today, being divided by things like race, religion and political persuasion,” David says. “It was a problem I knew we had to take on in the only way I know how, through the power of music to unite. It’s not about politics – just love and uplifting. My goal was to bring artists together to stand up for each other, for people of all races to understand all that we have in common despite our differences. I am honored and humbled by the response of so many artists who wanted to be part of what became an historic moment in recording history. As the lyrics say, I truly believe ‘We are one race/We are one people/We are one nation under one God…with One Purpose/That we love one another.”

The song “We Are One” is the springboard of a new movement David has created, whose mission is to bring people together to promote unity, using music and concerts, involving different races and cultures, broadening the vision of acceptance and support for each other. David and his team at www.weareconcerts.org are bringing together performers from different races and cultures,

They are launching the song and concerts in cities most affected by racial divisions over the past years, including New York, Ferguson, Baltimore, Seattle, Dallas and others. David believes that bringing local choirs and other performers together is the best way to support and encourage one another. “We believe that in this way, students and communities, both as performances and audience, will experience first-hand the power of unity,” says David, who has performed an average of 100 concerts per year for kids as part of the LIFT program.

Starting with concerts in Los Angeles, he and his team will bring several high school choirs and other singers from local groups and choirs to perform together in one concert in each city. Featured national recording artists will perform with the help of local choirs. Each choir will perform a separate song, then all will join together for a memorable finale with all the artists and choirs together singing “We Are One.” David’s goal for this ambitious project is to reach a million kids over the next two and a half years.

True to the album’s title, Longoria enjoys recounting The Journey he’s been on since seeing legendary jazz trumpeter Al Hirt on TV and buying his first trumpet at the age of 10. Though he grew up studying classical and jazz, was inspired by Miles Davis, Arturo Sandoval and Freddie Hubbard and once played with Dizzy Gillespie, Longoria’s muse these past few years has been all about the groove and energizing dance floors everywhere.

David bought his first $65 dollar trumpet on layaway – a sum “hard to raise in a hurry when you’re ten and poor,” he says. Amazingly, he still plays the same gold plated trumpet to this day. The two have been on an amazing journey, starting every Sunday at church and including practicing every day of his childhood in his front yard. The horn led him to a multi-faceted career that found him playing for legendary pop and rock artists, including Foreigner, James Brown and Marvin Gaye. Making his solo recording debut at 17 with his Montage album, he was indie before it was cool, selling several thousand copies across the U.S. and Canada before moving to Los Angeles to continue his career.

Starting with regular performances at Magic Mountain with his own Dixieland style jazz group called the Walt Dixie World Quartet, David’s facility with a vast array of styles led to a busy career working in music for TV, film and commercials. While laying the groundwork on his current solo career, he performed with many of today’s top artists and performed everything from jazz, pop and dance music throughout the U.S. and Europe. The success of “Deeper Love,” his single with CeCe Peniston inspired him to return to the studio to record Baila! as a full length tribute to the many genres of music he loves, centered on the Latin music of his heritage.

“For me, The Journey comes down to having a great opportunity to use music as a way to touch people’s lives, bring smiles to their faces and keep them motivated to get up and dance while opening the door to the deeper human connections we all share,” David  says. “Nothing is as gratifying as touching people’s hearts with my music. Even more than hitting that high note at the end of a song. I’m very proud of the album because I feel we have created something truly original and groundbreaking and done something that no other trumpet player has done.”